Go out fast and hang on as long as possible

When that’s your last minute race plan, it’s pretty much guaranteed that you’re not going to have a “fun” day.

First woke up at 2am when the child got into bed with me. Alarm went off at 4:40, ten minutes later managed to rouse myself wondering what I was thinking drinking a bottle of wine last night and staying up past midnight. Rookie errors all round.
Make brekkie and stumble into a cab, making sure not to forget bag of mini saucisson: race food experimentation.

Nice journey to Worthing with the other horses from the stable.

Everyone spends most of the journey eating and moving kit between race packs and drop bags.

Starts to rain when we arrive, which suits me fine.

The rain looks like it might stay away and the forecast is good, means more kit shuffling – we’re going to be hot very soon as the route goes straight up a hill.

Surprised by how many people there are at registration, feels very different from other UK trail races I’ve done.

All very well organised though and it’s not long before we’re off. 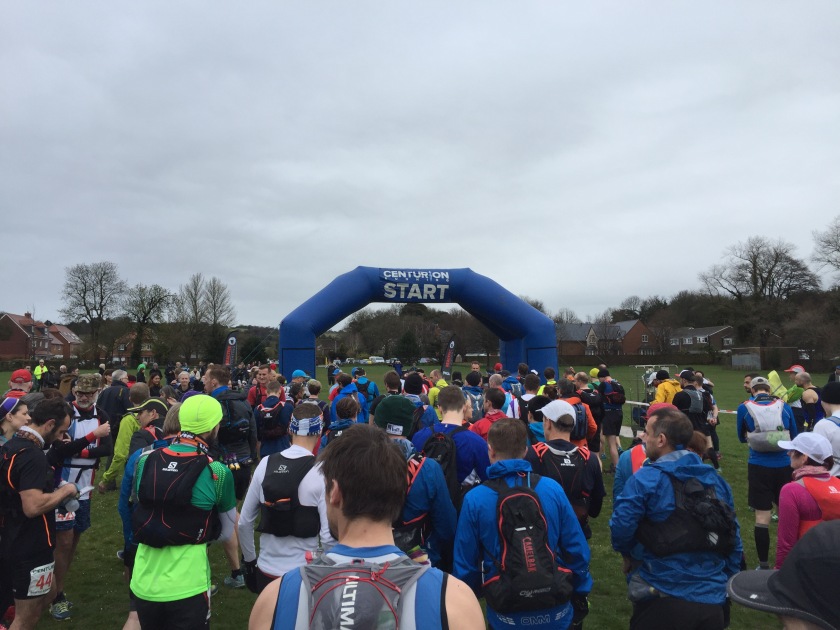 Bump into Mark from the spine, ask him how his feet are then quickly apologise, no doubt he’s had enough of that question (though if you’ve seen the photos you’d ask too, stuff of nightmares).

Concentrate on overtaking as many people as possible, running faster than I have since last August, heart rate over 170 which feels weird after months of SLOW training at 136.

Weather clears up, feeling happy and sprightly and keep up a good pace into CP1 at 11 miles. 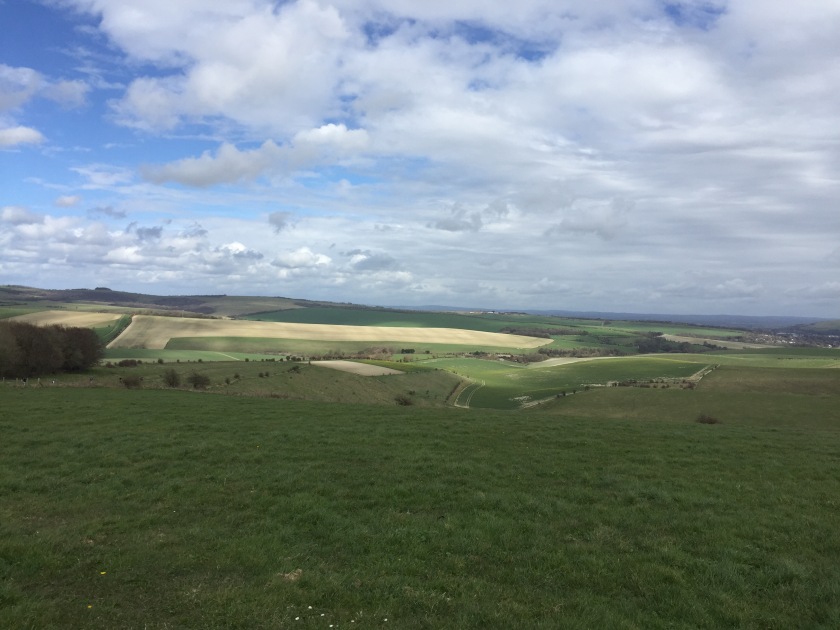 Don’t stop and head straight off up the next hill, nibbling sausages.

The glute I tore two weeks ago has set up a persistent complaint, the other one and both hamstrings soon join in.

Decide to ignore them and keep pushing on, despite inevitable telling off from physio and subsequent lingering pain.

Pass the fields of pigs, respectfully wait until I’m out of sight before having another sausage.

Get to next CP at the 17 mile point, top up water, grab 2 biscuits and a jelly baby and head off into the rapidly warming day.

Starting to feel a bit heavy and sluggish, the wine from last night and lack of training adding to the cacophony of “body parts requiring attention”.

Actually realise am feeling decidedly peculiar. Very hot, very heavy and on the verge of being sick. Decide to slow down and force some food down, and drink more. Very aware that it’s far too early in the day to vomit and still make it to the finish.

Soon pass a digger and a massive mound of stinking black stuff, speculate that it must be condensed farmyard excrement. It takes a lot of willpower to keep what little food I have in my stomach, in my stomach.

Spend some time thinking that the sloshing from my water bottle is very annoying and it needs to be upgraded to a soft flask like the other one, even if letting the excess coke fizz out does feel like you’re milking yourself. Disconcerting, but makes me laugh.

Feeling better arrive at CP3, 27 miles. Look at the ham sandwiches, stomach says no, take a bite anyway. Whole body says no, compromise on two biscuits and a jelly baby. Head back out up yet another hill.

Relish the thought that it’s over half way. Concentrate on keeping the pace up and drinking water. Eat the odd sausage and some shot blox.

Remind myself for the hundredth time today that I must buy new trail shoes, 500 miles isn’t so bad, but after 5 years they have zero cushioning left and I can feel every pebble on the amply pebbled trails.

Next couple of CPs come and go, fill up with coke and water, supplement the biscuit diet with a cherry tomato and a couple of satsuma segments. Worry that there is going to be a lot of leftovers.

Skip the last CP as only 4 miles to the end, slide down the sticky muddy path to Eastbourne and push as hard as I can along the horrible flat road to the end.

Can’t stomach anything other than the food of champions at this point (snickers), luckily always have a few stuffed in my pockets.

Knew about the lap of the track at the finish, but still seems like a cruel joke.

Very surprised to find my fellow stablemates cheering and hugging me, wtf? Surely I would have noticed them coming past me? After some confused questions realise they dropped out at 27m and got a cab to the end.

Shower, hot dog then back on train to London (with wine).

Despite feeling ropey for a while, and the lack of training making everything hurt much more than it should have, had a good day out.

Very well organised and amazing support. Definitely up for more races at this distance, very pleasant contrast to the spine.

Wish I’d put some sun cream on though, ouch.

Oh, and the sausage experiment?  Nice and tasty, but a little too strong after a while – need something milder…