There’s a silly joke that somehow managed to become my overriding training motivator:

If I listened to my body, I’d never get out of bed

No wonder I kept getting injured.

I’m standing at the starting line on the 400 meter track in Tooting Bec, waiting along with 46 others for the signal to start our journey to self transcendence (hopefully) by running, walking or crawling as many laps as we can over the following 24 hours.

Not for the first time I reflect that I really have no business being here, I haven’t been able to train properly for 5 months (3 of those didn’t involve any running whatsoever) and should have given up my place to someone more deserving.

I didn’t though, the need to be part of an event is like the irresistible lure of a narcotic, an itch that hasn’t been scratched for over a year. This isn’t just any old event either, encapsulating nearly everything I love about long distance running, especially the small field and quirky mix of runners and supporters. Most ultra runners think 24h track racing is weird, let alone the general population, and that suits me just fine, presumably because I feel comfortable in the mix.

People are drawn to this race (and type of event) for various reasons; curiosity to how far they can run without the distractions of navigating (or distractions of any kind!), attempting to qualify for national teams, or maybe just to see what the fuss is all about.

I’m glad I did turn up. I ended up having the best race I’ve ever had, and I wasn’t even racing. 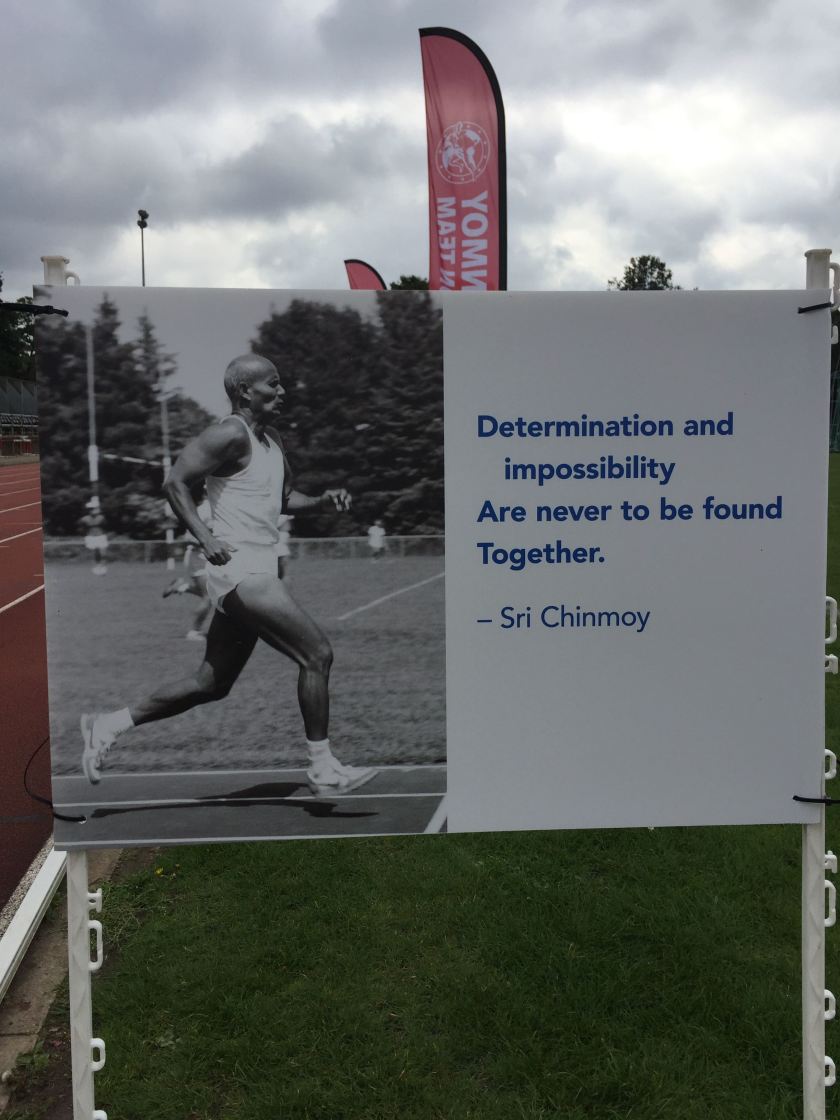 No PB, no great epiphanies, no new friendships forged from grinding out painful mile after mile together. I ran and walked 101.7 miles, and nothing really hurt very much. I was happy and calm (most of the time), tested different food than I normally eat (partial win), experimented with a very controlled caffeine intake (fail – fell asleep for an hour!) but above all I listened to my body.

A few months ago I saw a therapist to help me give up smoking (hardly a useful habit, even if you don’t have aspirations of being called an athlete), mostly using hypnosis to allow me to think clearly and calmly, without distractions.

The session worked and over the course of it a couple of, ahem, “matters requiring attention” broke free from their shackles, and now out in the open couldn’t really be ignored for much longer.  I booked myself back in for some follow up discussions.

We’ve all got issues, and they affect us in different ways. I learnt a lot about myself over the subsequent months, but importantly we didn’t dwell on what caused those destructive tangled pathways and instead were very focused on the future. Considering how to apply the lessons I’d learned, looking ahead with a slightly raised chin, that little bit better equipped mentally, and a feeling of being a smidge more in control of my destiny.

You can hear noises without listening to their meaning or content, the sound waves pass through your passive body, or the signals from nerves dissipate without triggering any response.

Automatons and reflexes manage to cover the bulk of events that manage to break though the first barrier, and even if some thought is required, you’re often in autopilot mode. This isn’t necessarily a bad thing: we don’t have the time or capacity to employ deep thinking for everything that comes along.

There are some things, and some times, when a good listen is the only appropriate action, when ignoring it could lead to your relationship breaking up, or irreversible health deterioration, or something else you really don’t want to happen. The big stuff, or the big life changing outcomes at any rate.

It’s easy to gloss over lots of things in your life that seem to be the norm, an innate and unchangeable part of your personality, but sitting in a quiet room, wrapped in a warm blanket with nothing else to do for an hour, with a non judgemental, objective listener, who was asking good questions, has a way of allowing you to question some of those.

For example I hadn’t considered the relationship between my mind and my body. (I’ll spare you the other revelations).

“Relationship” sounds daft, but of course they’re related, and both can affect the other. Generally it seems that the mind decides and the body obeys. Certainly in my case anyway, and most of the time my body does what it’s told, until it just stops and refuses to play any more.

When I dug deeper, it became clear that over the last year or so I’d become angry and upset with my misbehaving physical parts.  I’d begun doling out punishment in the form of withheld rest, booze and gruelling workouts in return for the disappointment of injury which was thwarting my grandiose plans of running successes.

When prompted to remember times when I was in a better place, two races came to mind immediately. One was the Crawley 12h track race, when I felt that I was gliding effortlessly along above the ground, in a very happy place. The other was surprisingly the Spine Race: I remember being in complete awe of my legs, I kept eating and they just kept moving, for days and days, with no complaints.

I need more of those kinds of memories.

As I gently trundled around the Tooting track a large chunk of my attention was constantly assessing pain levels. Nothing unusual about that, but I was very clear that I’d stop if anything hurt too much, something I’ve never allowed myself to think before.

I had some secret and not so secret mileage goals, but for the first time wasn’t all that bothered whether I hit them or not, they were further down the priority list than finishing in one piece.

My race plan had been to start slowly and slow down, but I hadn’t anticipated being behind the 83 year old for over 7 hours! Thankfully he slowed down a bit and let me save some face.

I knew better than to chase the “sprinters”, some inevitability burnt themselves out, but a few kept up an amazing pace for the entire race. Norbert Mihalik ran 161 miles, that’s 6 back to back 4 hour marathons… mind blowing.

A few friendly faces turned up at different times and provided a bit of distraction, not that I was particularly bored, but it was nice to see Debbie and Martin, who have been very involved in my running ups and downs, as well as giving me food experimentation ideas (and incredibly useful nutrition and training plans).

Marissa popped in for a while for some nice chats and to drop off some more food and water, all very much appreciated, as was my now very neatly organised table.

James and Ben swung by on their way to the pub, then decided to stick around and cheer me on for a couple of hours instead. They provided some good entertainment but I was very tempted to stop for a can of beer and some pizza!

Ben even came back the next morning on his long run, ostensibly to make sure I was ok but I suspect to take photos of the mess he anticipated finding. He took the disappointment well and did some kit maintenance chores for me.

Anna B was lap counting during the night, and her whooping and cheering really helped me to keep smiling, even though by that point I was staggering all over the place like a drunk. I think it was due to lack of caffeine but it could be lack of practice too – training your child to make their own breakfast at the weekend is so worth it.

My family and in laws turned up for the last hour, which was just the best thing ever. The shouts of “come on daddy, run!” even got me out of my ultra shuffle for a few laps.

Even though I covered a lot of miles without any training – which I think demonstrates that a strong base fitness and endurance level does last a long time – I definitely suffered in other aspects. My feet hurt a lot, and I didn’t make it through the night without sleeping, neither of which are typically a problem in a relatively short race like this. Also I was incredibly tired and hungry for the next week, so my recovery was a bit slower than normal.

I’m still unrealistically ambitious, but I’ve got a new angle now. Lots of attention to what I actually need, from better core strength to more sleep and less time exercising (really!).

I want to be able to run as I get older, at any speed, much more than I want to win any races.

Listen to those niggles, they need just as much attention as a hungry belly, and get that foam roller out of the cupboard, it’s your new best mate.